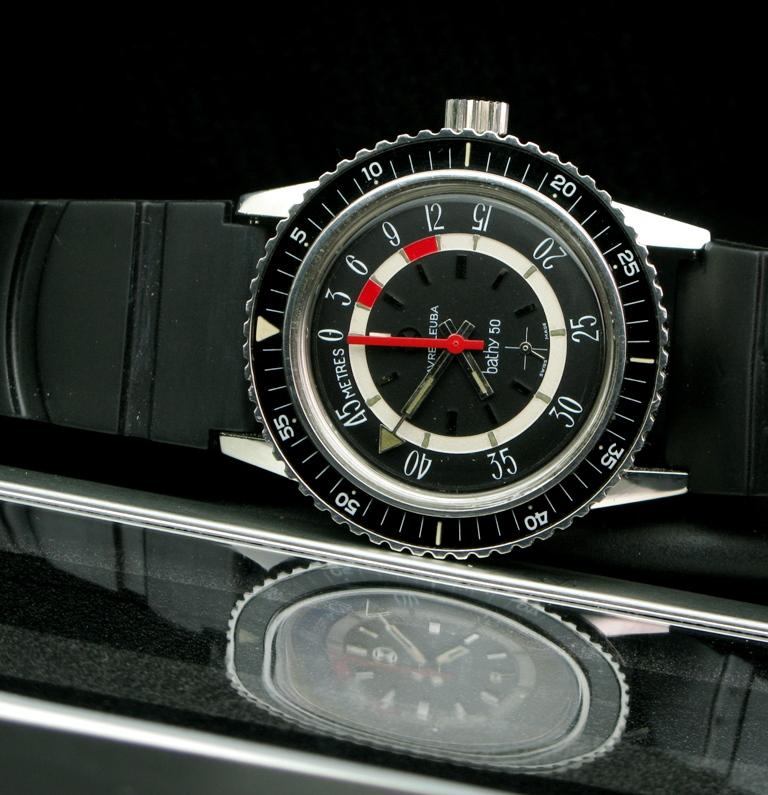 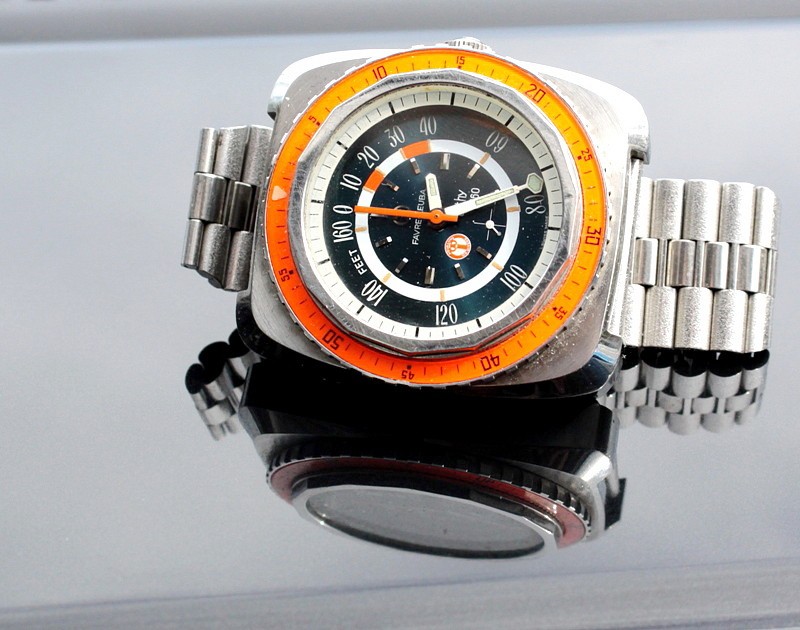 FAVRE-LEUBA, TIMEKEEPERS SINCE 1718
The 18th century was the century of Enlightenment. Europe teemed with inventors and thinkers, whose genius transformed daring new ideas into crowning achievements. Musicians, artists, philosophers and scientists stamped their times with their courage, passion and remarkable talents. One of them, Abraham Favre, the founder of today’s Favre-Leuba manufactory, decided to try his hand at making watches. Tucked away in La Chaux-de-Fonds in the Neuchâtel Jura, this church elder became initiated into the complexities of watchmaking in 1718 under the watchful eye of Mr Gagnebin, an experienced master watchmaker. Their relationship was based on some carefully-planned negotiations, as a notarized agreement signed on March 29, 1718 shows. In return for the knowledge imparted by Mr Gagnebin:

“Mr Favre undertakes to provide Mr Gagnebin with lodging in his house in La Chaux-de-Fonds, giving him the use of a room fitted with necessary furniture like a bed with proper bedding, chairs and a table with tablecloth and napkins as well as table and kitchen furniture, allaccording to the needs and wishes of Mr Gagnebin. He will also do his laundryand his cooking, make him bread, sweep and tidy up his room, make his bed, clean and grease his shoes, and provide firewood as well as soup and candles. For the latter, the parties have settled on four livres a year. In exchange, Mr Gagnebin has proposed to have a nice work-bench made for Mr Favre by the summer on which they will be able to work together on the art of watchmaking.”

Horological knowledge in exchange for a furnished room, polished shoes and firewood for heating up soup; such was the agreement which led to the birth of one of Switzerland’s most prestigious watch brands. Graduating from passionate enthusiast to specialist, Mr Abraham Favre decided to become a watchmaker. His profession was soon recognized and officially recorded on “the thirtieth of March seventeen thirty-seven” in Le Locle. In a carefully-preserved document, Mr Abraham Sandoz-Genton, solicitor, confirmed that “Mr Abram Favre, son of Mr Abram Favre, church elder and part-time judge of La Chaux-de-Fonds” was officially declared a “watchmaker”.


BIRTH OF ONE OF SWITZERLAND’S OLDEST WATCH COMPANIES
This official registration in 1737 represented the first major consecration of a life dedicated to the art of watchmaking as well as the establishment of one of the very first watch companies in Switzerland. Thanks to this ingenious craftsman’s pioneering spirit and strong work ethic, this small company has gone from strength to strength over the eight generations it has been passed down from father to son. Favre-Leuba has a long, impressive and astonishing history: the first Favre watchmaker mentioned in the notarized acts of 1718, a manufactory officially registered in 1737, a promotion to the position of “Master watchmaker of Le Locle” certified in 1751, a close working relationship until the end of the 18th century with Jacques-Frédéric Houriet, the father of Swiss chronometry, and an unbroken line of eight generations of watchmakers. Like other renowned brands, Favre-Leuba can look back over a long and illustrious history.


A LEGENDARY AMBASSADOR
One story is that the writer and philosopher Jean-Jacques Rousseau owned a Favre timepiece. On his way to England in 1765, Jean-Jacques Rousseau spent ten days with his friend Doctor Abraham Gagnebin, a close relative of Abraham Favre and his son who had the same name. Between walks and other botanical studies in the verdant valleys of the Neuchâtel mountains, it is nice to imagine them talking about the art of watchmaking and giving expression to man’s enigmatic and intimate relationship with time. Born in 1712 into a family of watchmakers, Rousseau would certainly have been intrigued by the expertise and craftsmanship displayed by Abraham Favre, his son Abraham and his son-in-law Jacques-Frédéric Houriet. An example of this expertise and craftsmanship is the magnificent 18th century pocket-watch presented here, which is also on display at the International Museum of Horology in La Chaux-de-Fonds.


POCKET WATCH WITH 2 HANDS, MADE BETWEEN 1780 AND 1790
Crafted in the Louis XVI style and dating from the last quarter of the 18th century, this pocket watch in a silver case has a movement signed “A. Favre fils au Locle”. It features a simple white enamel dial with Roman numerals and the movement is finely decorated in the English style. The balance-cock is pierced and richly chased with foliage and acanthus leaves in the fashion of the period. These same motifs, finely engraved, are repeated over the entire movement.


AN UNFAILING VALUE
When you admire this beautiful timepiece, it is easy to forget that the end of the 18th century was a violent and dangerous time. Triumphant in Paris, the French Revolution of 1789 had divided the people of France, divisions that were felt as far away as the Neuchâtel mountains. In both Le Locle and La Chaux-de-Fonds, revolutionary agitators clashed with the ideas of the counter-revolutionaries. Despite the political and economic turmoil, life went on. In 1795, a letter from Jacques-Frédéric Houriet shows that he was still happily and confidently working with Abraham Favre’s son, whose work he described as “meticulous” and “exceptional”. Here was further testimony of Favre’s attention to detail and mastery, qualities that have been transmitted from generation to generation. the meeting oF two Builders The Favres, however, have not been the only actors in this story. Early in the 19th century, the Leubas joined forces with them and helped build up the company. Under their combined commercial and artistic expertise, the company flourished both in Switzerland and abroad, gaining an international reputation in the process. Besides a concern for quality and precision, the watch trade demanded a keen sense of business. From Le Locle to Valparaiso, Moscow, New York, Beirut, Bahrain and Singapore: exotic names that conjure up exciting journeys, enriching experiences and enduring impressions. Souvenirs of this conquest of distant markets include Fritz Favre’s passport, stamped in 1863 in Saint-Petersburg on the orders of His Imperial Majesty Alexander II, Tsar of all the Russias, letters sent from London and Panama, medals from the 1855 Universal Exposition in Paris, a letter sent to Fritz Favre in Chile, accounts of journeys from Bombay and Calcutta, etc. No country seemed beyond the reach of this family business, giving it the dimension of a truly international brand. This is shown by the company’s letterhead from the end of the 19th century, reproduced here. Ignoring the risks of travelling by coach, train, steamer or plane, the Favres and Leubas have conducted business in the remotest regions of the world, thereby confirming their dynamism, unfailing optimism and passionate commitment.


LEGENDARY MODELS
Even though Abraham Favre laid the foundation stone of the Favre-Leuba building almost three hundred years ago, it was from 1940 to 1970 that the brand made its most important technical advances in the field of watchmaking, at a time when it was producing almost 600,000 watches a year.

BIVOUAC, THE WATCH FOR EVERY SUMMIT
In 1934, the young ethnologist, Paul-Emile Victor, made his first trip to Greenland. In 1947, this ecology pioneer founded the French Polar Expeditions and went on to lead 31 missions to the Arctic and Antarctic. From 1962 onwards, one instrument emerged as his indispensable companion: the famous Favre-Leuba Bivouac.
Housed in a stainless steel case, the movement has really been really put through its paces, on all five continents and in all conditions. History will remember the extremely accurate performance of this legendary watch in the most hostile environments, at least for as long as it remembers the adventures of some very exceptional men who loved the great outdoors. Aside from Paul-Emile Victor’s expeditions to the Antarctic mentioned above, there were Michel Darbellay’s first solo ascent of the Eiger or Walter Bonatti’s first conquest of the north face of the Matterhorn. At the end of his climb, this mountaineering virtuoso said, “I can only praise the good performance of the Bivouac; a marvel
and a friend!”

1962 – BIVOUAC
The revolutionary BIVOUAC has been regarded as an essential instrument for mountaineers since its launch in 1962.
It is equipped with multiple measurement functions, one of which indicates the altitude and the weather based on barometric pressure. The aneroid barometer is a real mechanical marvel that functions by means of a partial vacuum in a metal capsule, which contracts when the air pressure is high and expands when it is low. These variations are amplified and transmitted to a mechanism which, coupled with an altimeter, displays the information on the dial. – Rotating bezel with mobile altitude scale – Barometric scale with red marker at 760 mmHg – Red altimeter-barometer hand

FROM ICE TO OCEAN DEPTHS
Before worrying about rust, watchmakers sought a way to combat dust. It was from research into sealing their timepieces against air-born impurities that the first water-resistant watches were born. But it was thanks to the invention of the screw-down crown that the first truly waterproof watch was made. Since then, diver’s watches have undergone spectacular progress, aided by their use in submarine combat units.

1966 - BATHY
It was with the BATHY that Favre-Leuba created the first depth gauge graduated in metres (50 m) and feet (160 ft).
Besides indicating the length of time spent underwater, the BATHY gave divers a direct and accurate reading of their depth.
The BATHY still embodies the Favre-Leuba spirit: inventing new precision instruments that unite the art of watchmaking and a passion for sport.
– Water-resistance tested to 10 atm
– Unidirectional rotating bezel with 60 notches for calculating diving time
– Decompression stages indicator
– High-resistance glass
– Fluorescent displays 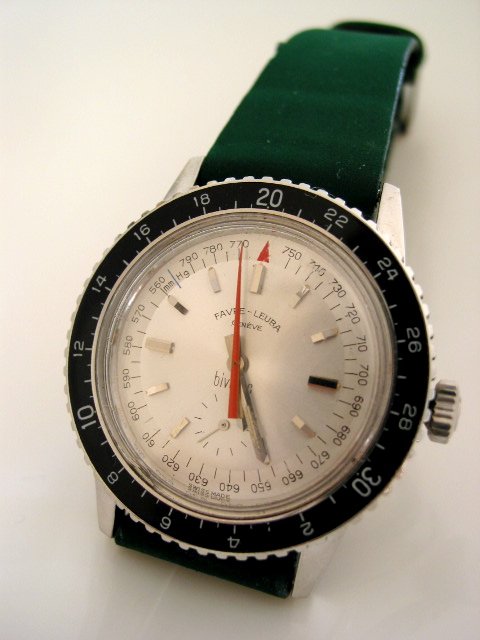 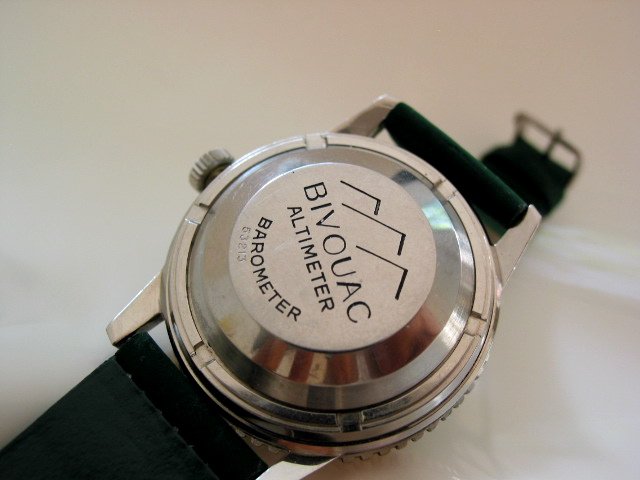 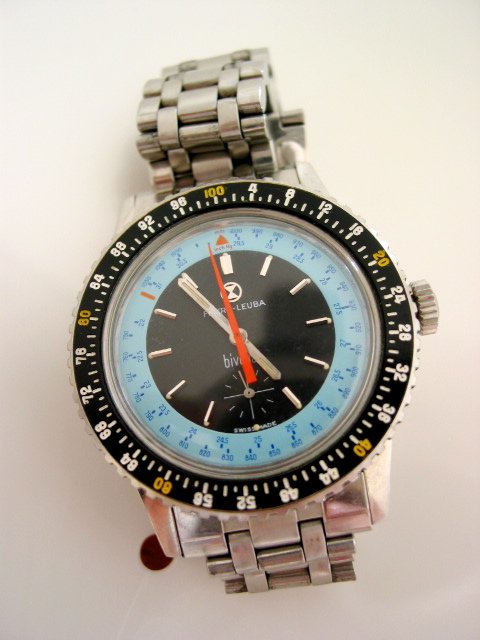 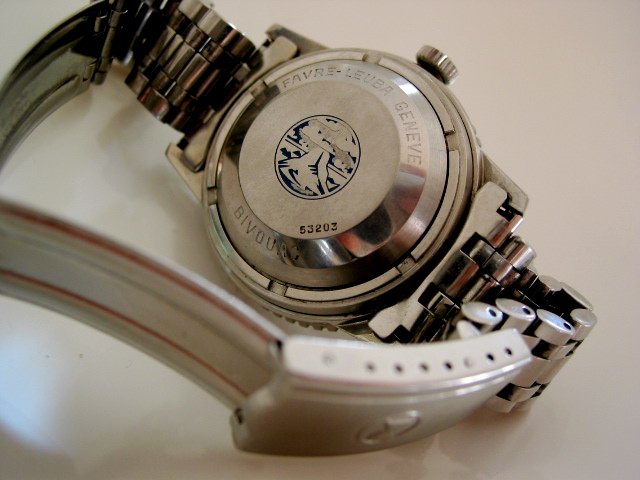 The watch that came in from the cold 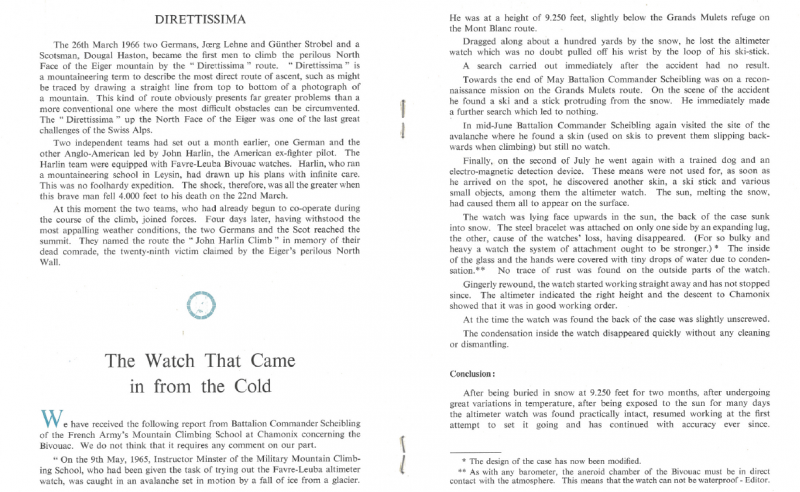 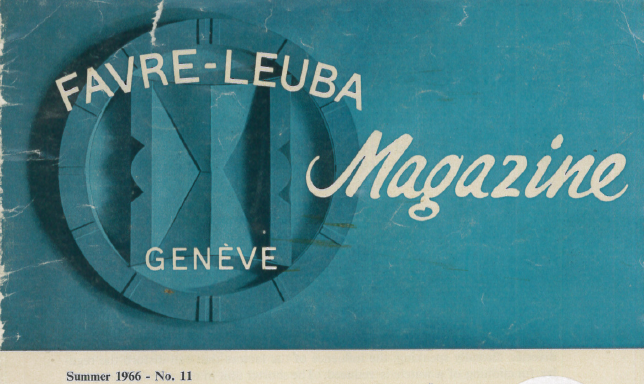 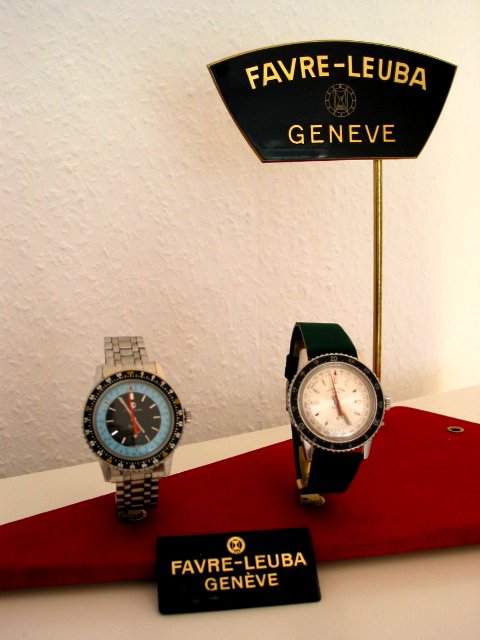 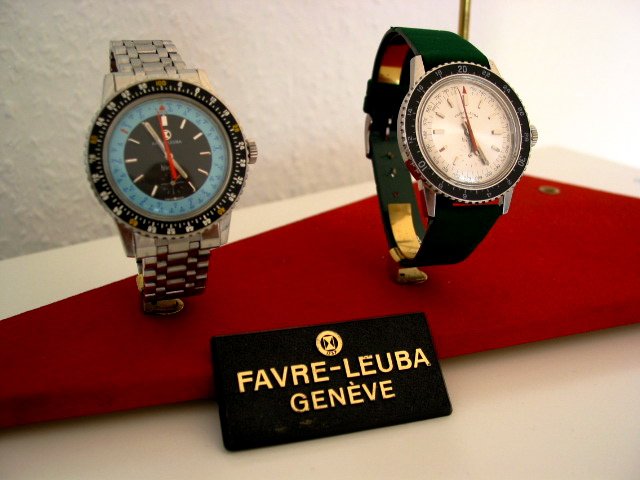 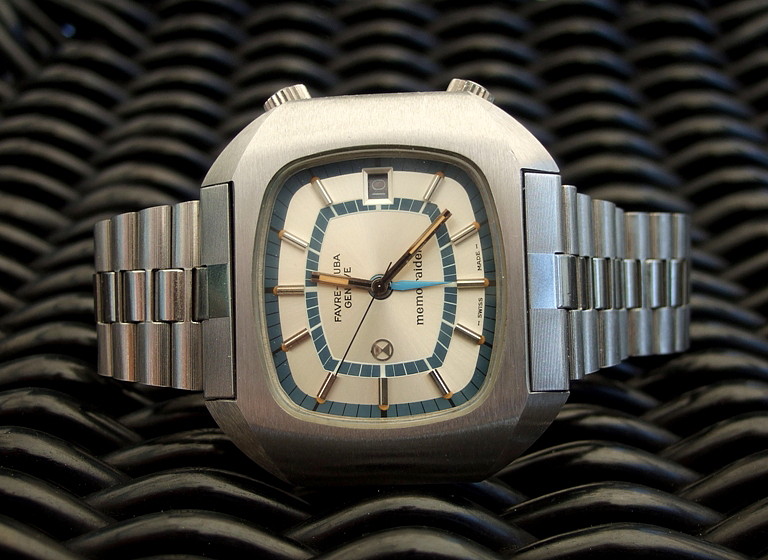 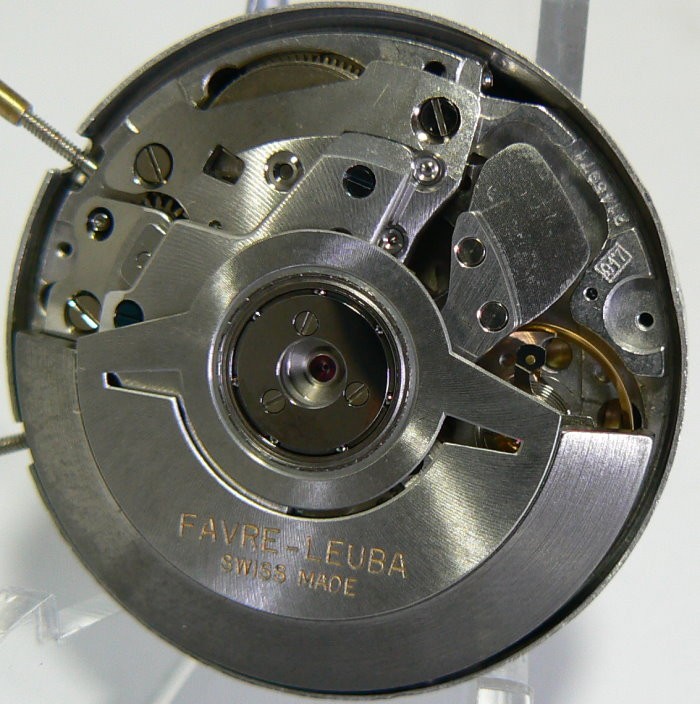