Back in 1997 I purchased this Union flieger style watch from a jeweler in Chemnitz (Karat Uhren & Schmuck) and wanted to add some more info about this model for those who are interested.

My brother & I were attending a wedding in Bremen before driving to Zittau to visit relatives when we stopped on the way in Chemnitz to have lunch. Not far from the old pre-war Autobahn construction Denkmal was a neu-bau shopping center and it was in that plaza where the jewelry store was located. Looking in the shop window I saw the Union flieger style watches on display so I went inside to have a better look.

The price was 550DM and despite having an eta Werk I remember clearly the shop owner telling me, "nie wieder bekommst du eine Uhr aus Glashutte fuer dieses Geld - ein echt sammler stueck.." The shop keeper then explained that these new Union watches could only be purchased in die neuen Laender. I'm not sure exactly why this was but the shop owner said it had something to do with these watches being a kind of test run.

Later during my trip I had this "exclusivity" confirmed by two other jewelers in Bremen & Nuremberg who mentioned that they had no access to the Union watches when I went to inquire.

I've subsequently learned that there was also an earlier Glashutte caliber 10-30 titan flieger watch in the identical case which at the time was unknown to me.

I've somehow managed to hang on to the original catalogue and here it is:

I hope this info has been of interest,

Hi Konrad,
I known the Glashütte version of this Flieger but didn't know there was also a Union Version of it.
So thanks for the information and the private story behind.
L

MeisterKaio schrieb:
Hi Konrad,
I known the Glashütte version of this Flieger but didn't know there was also a Union Version of it.
So thanks for the information and the private story behind.
Zum Vergrößern anklicken....

I think that's the main reason I wanted to share this information because I have also read online mis-information & ignorance about this model.

Sure it doesn't have a Glashutte Werk but that doesn't mean you can't enjoy the watch for what it is as a limited production historical model.

I remember when collectors used to scoff at Tudor because it "wasn't a Rolex"..

I still enjoy my Union

I liked it so much that I made 5 more Homage watches myself.
One is original, the others I made myself with NOS dials. 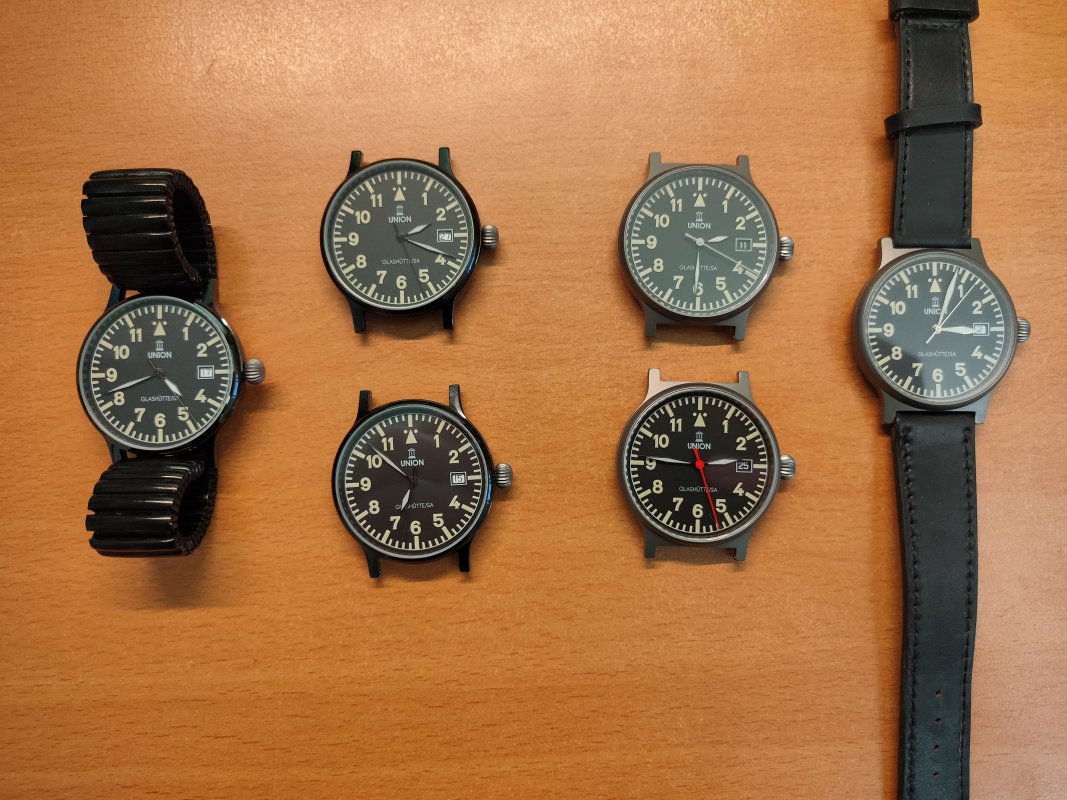 Neue Auktion: Michael Collins Gold Speedmaster: Mal was seltenes :super: "This highly important timepiece is accompanied by a hand written note that reads "This Omega watch was given to me...
[Erledigt]